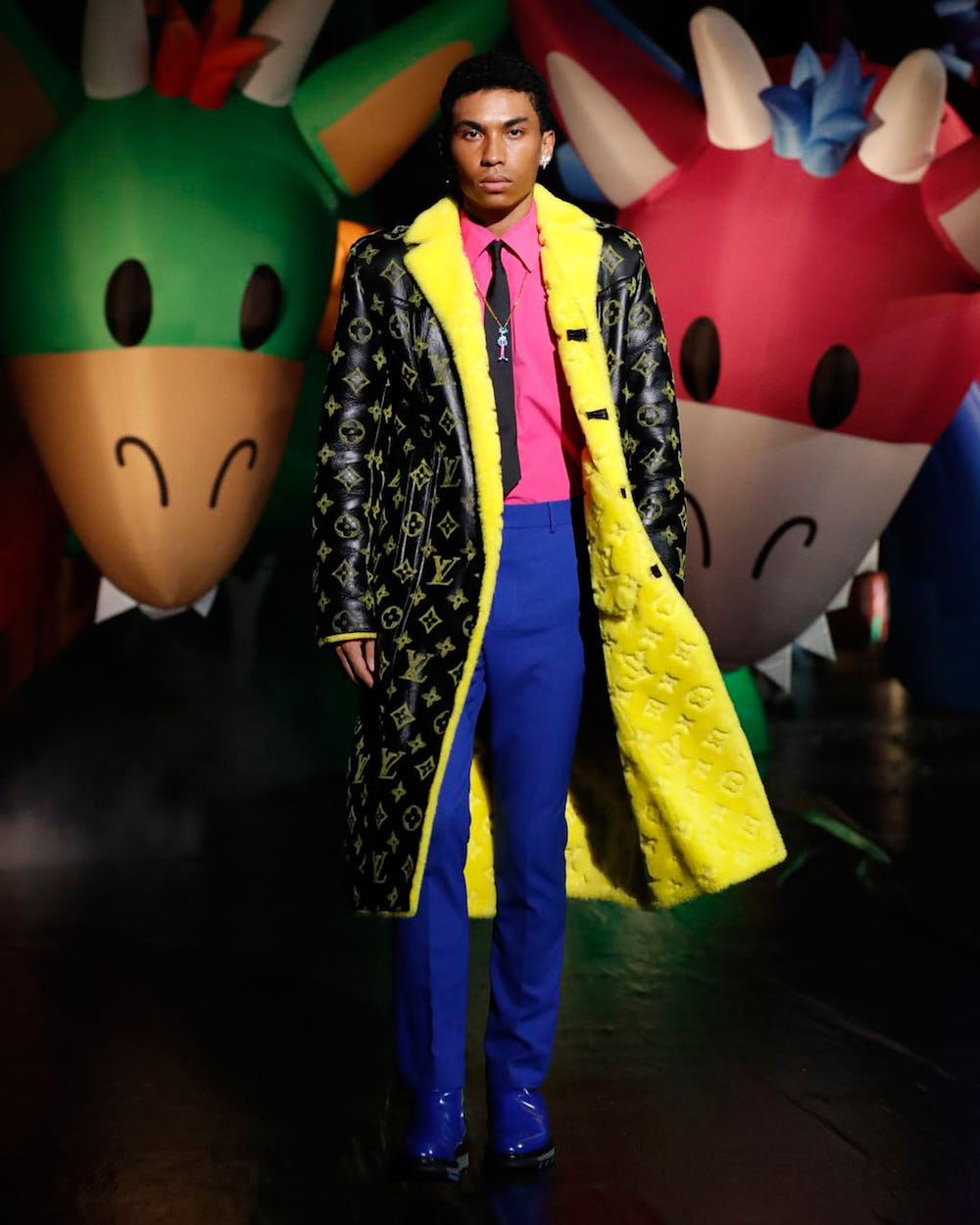 Today in Tokyo, Virgil Abloh presented the Louis Vuitton men’s Spring/Summer 2021 collection in a parade-like presentation entitled “Message in a Bottle.” The designer was inspired by his Ghanaian roots, shopping for kid’s toys in Paris, and what he aims to do in the future.

In a personal essay entitled “Myth vs. Reality: The Full Story” that accompanied the show, Abloh dives further into how his West African cultural heritage inspired the palette, patterns, puppets, and accessories in the collection. He talks about how going on a brief hiatus last fall, he fell into a more introspective mindset and spent time with his parents, saturated in childhood memories. Through a deeply personal lens, Abloh explains how his family’s Kente clothes, hand-carved figurines, wooden masks, and traditional wooden sculptures informed the foundation for this new collection.

The resulting collection includes slender suits, surreal accessories, and motifs that reminded Abloh of the way Ghanaian men dresses in 1970s—including his father. New to independence after British colonial rule, these men used personal style as a way to express themselves and their newfound power and freedom. The evolving exchange of cultural and national exploration is seen in ska wardrobe-inspired prints, distorted on a canvas bag, inflatable Keepall and Soft Trunk styles, suit jackets with crocheted teddy bears, a Trunk wearable wallet with puppet patches, a distorted Damier tailored car coat, white skate shoes and cowboy boots-meet-sneakers, the return of Marc Jacobs and Keith Warren’s teddy bear from 2005, and more.

The season also showcased an Upcycling Ideology presented in a four-part plan. Recycled materials from overstock, recycling ideas, reiterating a previous season, and a homework initiative for his team kick-start this framework. In the new collection, 30 looks are made from new material, 25 are made from recycled fabrics, and 25 looks are reshown from the previous collection. With this notion, Abloh questions the idea of inherited social preference, how worth is defined by emotional value, and argues that ideas and clothing are no longer disposable. From this, we see a new “LV” logo using the green recycling arrows, making the old…new.

The livestream from Tokyo was more like a film, one part directed by the Nigerian poet and filmmaker Caleb Femi, and another by Japanese filmmaker Takashi Miike. Set to the tone of a four-session soundtrack that was recorded in London’s Church Studios and produced by Benji B., musicians like The Yussef Dayes Trio, Ghanaian artist Omar (who performed Ghana Emotion), and Hyukoh, were joined by emerging and established jazz musicians in London. The performances were layered with a poem recited by Femi entitled Brother. “Caleb Femi’s poem is a deep look—via my soul—at my exact emotions towards the world this year, from maxi level to micro. Part of my platform at Louis Vuitton is about giving opportunities to those who deserve it. Caleb’s talent calls for a global stage,” said Abloh.

The musical component also included a performance by Lauryn Hill, and in honor of the contribution, Louis Vuitton and Abloh made a donation to Hill’s MLH Foundation—an organization that directly supports education, health, agriculture, technology, and community-based businesses and development initiatives throughout the African Diaspora. All proceeds of the donation benefit Black businesses.

To dig deeper, Abloh wrote a manifesto in response to the events of 2020, how he as a Black designer feels in the fashion establishment, a clarification on previous collections, and a pledge for future commitments. As the film ends, and the demonstration rounds out, Abloh digs into his core values of diversity, inclusivity, and unity with a powerful note. “For all intents and nuances, I have often spelled out the interceptive reality of myself as a black man in a French luxury house. I am well aware of my responsibilities,” he said. “Rather than preaching about it, I hope to lead by example and unlock the door for future generations…I believe in nuance because I believe in the intelligence and perceptiveness of my audiences. As I proceed, and continue to infuse my vision with black aesthetics and inclusivity, I will never underestimate them.”

“Through my own reality, I am interested in the reversal of the expected roles of races within society, and the discourse it creates,” continued Abloh. “I am interested in contributing to the progression of fashion’s relationship with labels and stereotypes: ‘designer’ versus ‘image-maker’, ‘luxury’ versus ‘streetwear’, or the nuanced idea of streetwear versus ‘streetwear’ itself. In my game of inverted commas, streetwear is a community founded in subculture, while ‘streetwear’ is a commodity founded in fashion. Within my practice, I contribute to a Black canon of culture and art and its preservation.”